This package provides bindings to the Intel MKL Vector Mathematics Functions. This is often substantially faster than broadcasting Julia's built-in functions, especially when applying a transcendental function over a large array. Until Julia 0.6 the package was registered as VML.jl.

Similar packages are Yeppp.jl, which wraps the open source Yeppp library, and AppleAccelerate.jl, which provides access to macOS's Accelerate framework.

There is currently the following issue between the CompilerSupportLibraries_jll artifact, which is used for example by SpecialFunctions.jl, and MKL_jll. Unless MKL_jll is loaded first, there might be wrong results coming from a small number of function for particular input array lengths. If you are unsure which, if any, your used packages might load this artifact, loading IntelVectorMath as the very first package should be fine.

Since version 0.4 IntelVectorMath uses the MKL_jll artifact, which is shared with other packages uses MKL, removing several other dependencies. This has the side effect that from version 0.4 onwards this package requires at least Julia 1.3.

For older versions of Julia IntelVectorMath v0.3 downloads its own version of MKL and keeps only the required files in its own directory. As such installing MKL.jl or MKL via intel are no longer required, and may mean some duplicate files if they are present. However, this package will adopt the new artifact system in the next minor version update and fix this issue. In the event that MKL was not installed properly you will get an error when first using it. Please try running

If this does not work, please open an issue and include the output of <packagedir>/deps/build.log.

If you used this package prior to its renaming, you may have to run ] rm VML first. Otherwise there will be a conflict due to the UUID.

After loading IntelVectorMath, you have the supported function listed below, for example IntelVectorMath.sin(rand(100)). These should provide a significant speed-up over broadcasting the Base functions. Since the package name is quite long, an alias IVM is also exported to allow IVM.sin(rand(100)) after using the package. If you import the package, you can add this alias via const IVM = IntelVectorMath. Equally, you can replace IVM with another alias of your choice.

By default, IntelVectorMath uses VML_HA mode, which corresponds to an accuracy of <1 ulp, matching the accuracy of Julia's built-in openlibm implementation, although the exact results may be different. To specify low accuracy, use vml_set_accuracy(VML_LA). To specify enhanced performance, use vml_set_accuracy(VML_EP). More documentation regarding these options is available on Intel's website. 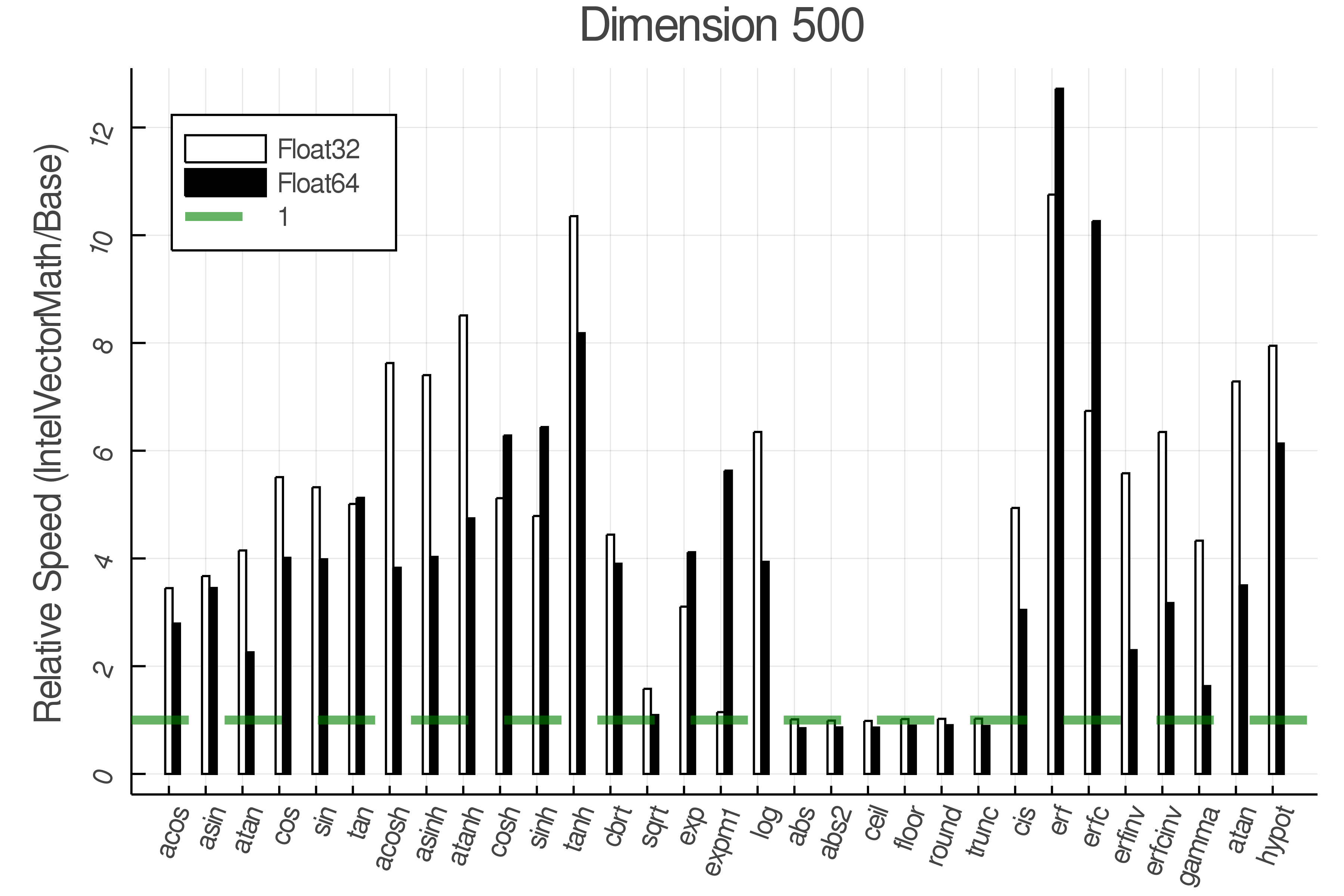 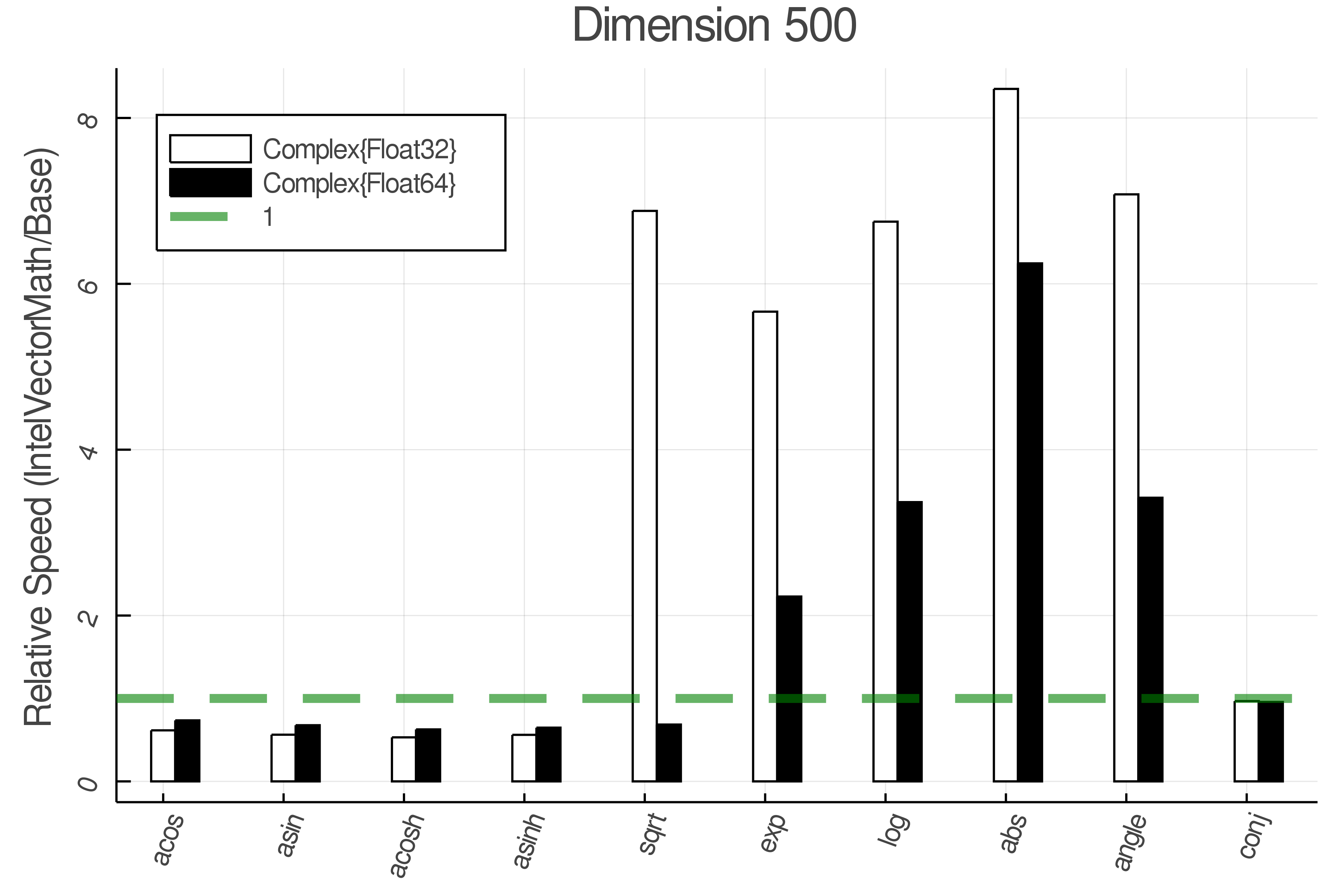 
Tests were performed on an Intel(R) Core(TM) i5-8250U @ 1.6 [GHz] 1800 Mhz. The dashed line indicates equivalent performance for IntelVectorMath versus the implementations in Base.

IntelVectorMath.jl supports the following functions, most for Float32 and Float64, while some also take complex numbers.

Next steps for this package

IntelVectorMath.jl uses CpuId.jl to detect if your processor supports the newer avx2 instructions, and if not defaults to libmkl_vml_avx. If your system does not have AVX this package will currently not work for you. If the CPU feature detection does not work for you, please open an issue.